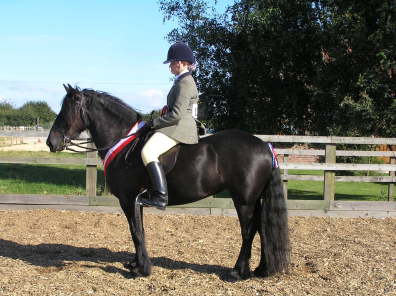 Section B.  Black with small star above eyelevel and a small smudge of white hairs below eyelevel

Bred by the late Mrs I M FitzGerald

Aster joined us in March 2005, newly and sympathetically backed and ready to bring on.  She has excelled our expectations in eveything she does and what Nicola could not do with this pony is not worth doing.  She has been a very successful showing pony, winning so many ridden championships we lost count.  She won the prestigious Dales Ridden Pony of the Year Championship in its first year, at the age of 7.

After receiving an awful injury to her hock putting an end to her showing career, we put her in foal and on 30 April 2010 she had her first foal, a colt we named Apollo.  Ever the diva, she is the only pony ever to have kept us waiting for her foal, an extra 10 days.  After a shaky start, not wanting her foal near her, she settled into being a brilliant, contented and natural mother.

Aster spent a few years on loan to friends in Derbyshire, doing dressage, pleasure rides and a little showing and in 2016 returned home once more. 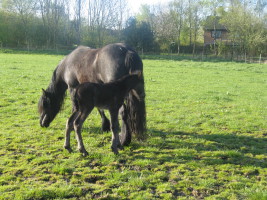