Prince came to us in 2008, bought from the Fell Pony sales as a weanling along with Harry and to keep Tynebank Harry company.

Born 18 April 2008, by Lunesdale Beckham and out of Lunesdale Regina

Prince always loved being the centre of attention and was naturally showy.  He was a quiet traveller and easy to show.  He oozed quality and was naturally forward going but with an awkward streak in there which kept you on your toes.  He jumped for fun and liked nothing better than to jump from one paddock to the next and back again.

We showed this pony ridden and his first show results were super, we booked him into three classes, rather a lot for a baby, but we knew he had stamina and that we would only do what we knew he could cope with.  On the day he did all three classes and he gained a second and two thirds.  His second show was the Fell breed show and he was 4th in a large novice class.  We did several more shows with him, no results too shabby, a few wins, a couple of reserve and championships under his belt.

Prince has now moved on, did some jumping classes with his new owner and has since moved on again, but doesn't live far away. 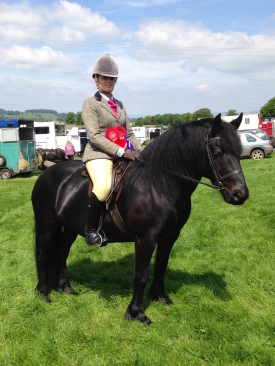