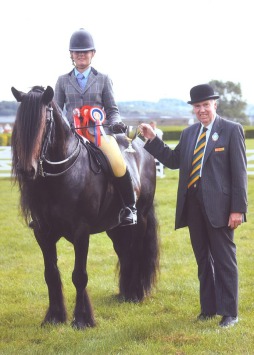 In 2010, Bill went to three shows and earned himself a third in his first ridden class.  Then a month later at his second, he won Novice Ridden M&M Large Breed and at his third, the NPS Area 5 Winter show he won Novice Pony in First Season, Novice Pony and was Novice Ridden Champion, qualifying for NPS, Ponies UK and NCPA finals.

In 2011, Cumbria Fell and Dales in May, Bill won three classes there qualifying for NPS Novice, Intermediate and Open Summer Finals.  He was Ridden Champion and also qualified for the Court Farm Ridden Dales Pony Final to be held in August.

Shown at just six shows in 2011, including the Great Yorshire Show, he did well at all.  He also went to NPS and Equifest for fun and placed well in each one.

Performance Show - August. Bill did four of the five classes, won the Handy pony with the highest score of the day, extraordinary for a pony previously frightened of his own shadow, won the Ridden.

This is the third time Nicola has won this final, each time with a pony in its first season

In only her sixth ever HOYS qualifying class at the Great Yorkshire Show on 14 August, wearing the number 999 with ride and conformation marks of 45/45, leading by 3 clear points, Nicola and Bill headed the class and qualified for Horse of the Year Show.  Bill also took M&M Champion and won a Silver Medal too.

Riding at HOYS has been an ambition for a number of years and it is nothing short of ironic that it was this pony, the one whom many thought to be unbreakable, who had some real confidence issues due to events in his early life who should be the one to take Nicola there.

At the final in October at the NEC, Bill was beautifully behaved and was given the highest ride mark on the day.  Sadly he wasn't the conformation judge's cup of tea and he was 11th overall, just missing out on a placing.  Do we care?  Not really, the achievement was getting there in the first place with this pony.