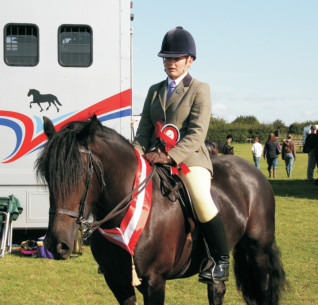 In 2006, Aster and Nicola became DPS Points Competition Champions with 1038 points overall and won the Kebroyd Trophy for Overall Champion, the Akehurst Tweed Trophy for Best Performance Score and the Viking Native's Trophy for the Best Junior Entry, Nicola being only 15.

In addition to this, Aster qualified in her first ever NPS Picton Novice Ridden Class and in August won her place for Ponies UK Summer Championships 2007 in the Kingsord Open and Dalkeith Junior Ridden classes.  Aster settled into showing like a duck tow ater and over the season took 6 ridden championships, 3 reserve championshiops and a Reserve Supreme of Show.

In 2007 we took a step up a notch to County level and here are just a few results...

Performance Show, August - Aster had to compete as an Open pony and won her ridden class and the Handy Pony much to our surprise as she had never done anything like this before.

At Ponies UK Northern in March she was Reserve Champion in one section and 1st reserve in the other.

After a very nasty kick to her hock from someone else's horse, Aster was retired from showing, but she is still with us, enjoying life to the full.