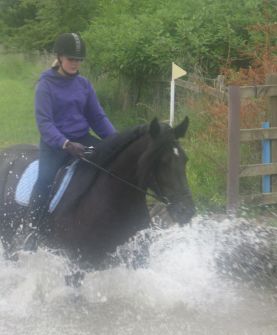 Joanne also known as Jojo came to live at the Close on her third birthday and was so totally wild and untouched that her quiet, sensible temperament was extremely well hidden.  She became our first home trained youngster and the first pony Nicola backed.  She is a dream pony and has been a prolific show winner.  Among her many, many championships both inhand and ridden, her most notable achievements are probably winning the first show we even entered with her after only being here a couple of months and winning Champion Dales at the Royal Show on 4 July 2007.  We knew we had something special in Jojo and she has continued to prove us right each year.  She excels at dressage, loves fun cross country and pleasure riding and adores teaching young children to ride.   She won the prestigious Dales Ridden Pony of the Year Championship in its second year, at the age of 7.

In the Dales Pony Centenary year 2016, because of her calm and sensible atttitude, Joanne was chosen to ride at the front of the Centenary ride through Barnard Castle, leading well over 60 ponies and riders through the town.  The noise of the ponies trotting by was unbelievable and everyone who rode in the procession speaks of how exhilerating the experience was. 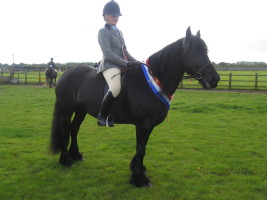