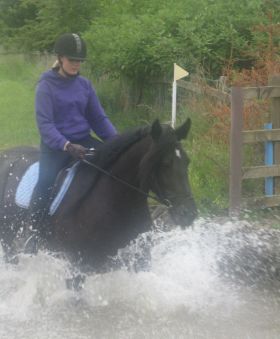 Joanne's first rosette and it was a red one!

She headed a large class of 24 mature ponies.  She stood for an hour and a quarter that day during judging and we knew we had something quite special in Joanne that day.  She had been with us less than 3 months.

In 2006, she was placed 2nd at the Royal Show and 5th at the Great Yorkshire.

Lightly shown in 2007, Joanne had a successful season.  She was ridden in 7 shows and placed 1st or 2nd in every one.

Derbyshire Fell and Dales, June - Joanne excelled in dressage and won her class with 70%, the highest score on the day.  She wonmixed equitation class and was 2nd in Junior Mare.

Performance Show, August, Competed at Intermediate level and won ridden class and WH for her section, having never jumped a course before.

NPS Summer, unplaced in finals, but at least she had qualified!

Ponies UK Finals, won 2 Ridden classes and 2nd Dales inhand and 1st Reserve Champion.  She won her place into two evening performances and coped with the buzz brilliantly.  During the same week she was 4th in Concours d'Elegance, 4th in Mixed Large Breed Novice Ridden and 6th in Mixed Junior Ridden.

2009 - Joanne had a rest over winter but took part in 3 dressage competitions, the only hairy among all the finer ponies, she held her own.

Spring Festival, Malvern.  Nicola had qualified for hyoung rider and came 5th overall in a huge class.  She was 2nd in an Open ridden qualifier while there and won her Junior Ridden Qualifier, taking Junior Ridden Champion.

In June, alongside Jessica Hobday and Sunglow Sterling, Nicola and Joanne represented the Dales Pony in the Native Pony Ridden Display at the Royal Show 2009.

NPS Summer Championships, Malvern.  6th in Peasedown Intermediate Ridden, 7th in Silver Medal Ridden Final. Trying her hoof at Dressage, she achieved a score of 69.5%.  There were over 60 entries and several weeks later, we received in the post, a rosette and qualification card.  Nicola and Joanne had won the Large Breed section, qualifying for NPS Top Spec finals at Addington in April 2010.  Perhaps though, the best result was the ridden pairs, alongside Jessica and Sterling again, and just for fun - a third  place from 21 pairs.  It was brilliant as they didn't get time to practice and went straight from a final class into this one to do their show!

This pony has done so much for us and won everything we could ask her to over the year and in 2010, Joanne took it easy on the show front and did a lot of fun stuff with Nicola instead; cross country at Craven Country Ride, taking in smaller jumps but always the water jumps as she seems to adore water.   A few dressage tests over Summer always with scores over 67%.

Performance Show 2010 at Askham Bryan.  Open Champion this time.  She excelled herself once again in dressage, handy pony, ridden showing, WH and SJ.

Addington 2011 - Dressage finals.  Unplace in M&M Dressage Championships, but we are blaming the lorry breaking down on the M6, a four and a half hour wait and arriving at the venue at 1am as we are sure it didn't help.