Misty as we called her was born on 30 May 2010 a few weeks early, but was soon bouncing around.  She had a large star and two matching white hind feet and had the most amazing movement and paces.  For a few days we thought she was a colt and names her Lyric, but six days later she revealed herself a filly and we changed the name.

On 28th January 2012 Misty became a resident of Blackrod, near Bolton and lived with another Dales mare for company.  She can now be seen riding the moors above Bolton, while Anne her owner has become a firm family friend. 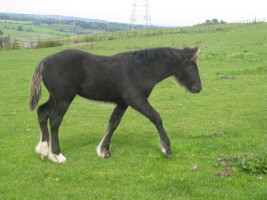