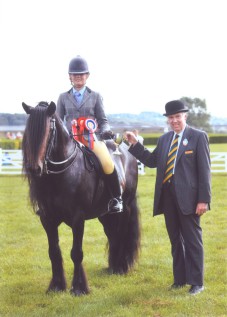 Bill came as a recently gelded stallion aged 6, unbroken and frightened of his own shadow.  He has a quick and quirky nature, very reactive, but is apparently a lot of fun to ride.  He trusts reluctantly, comes round in the end and has a wonderful relationship with Nicola.  Bill is another pony who has won many ridden and inhand classes.  His previous owner wasn't sure he would even be safe to ride, but we are pleased to say we took it slowly and he has settled to the job well.  He is another of our ponies who won the prestigious Dales Ridden Pony of the Year Championship aged 7 although his biggest achievement was qualifying at the Great Yorkshire Show for HOYS.  He was only just out of the ribbons at the final, achieved the highest ride mark on the day and for us it hardly matters as we know the journey to get there was the biggest achievement of all.

He continues to enjoy pleasure rides, took part in the DPS Centenary ride on 2016 alongside 60+ other ponies at speed and he likes a bit of jumping too.