Maddie as we called her came to us in 2006 and after settling in was broken to ride by Nicola.  She is the mother of Highclose Chancer, born in 2009, who inherited her calm nature and wonderful action.  Unfortunately she lost her filly foal in 2011 and we decided it unfair to put her in foal again and founda  wodnerful new home where she will be ridden regularly.  Maddie is unflappable, adores people, the ultimate nanny pony and we know she is happy in her new home.  We are even able to visit her now and again.

Maddie below with Highclose Chancer 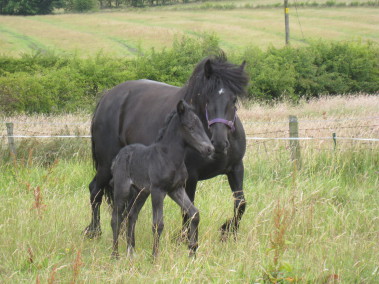